Years ago, I moved to New Hampshire as a Dartmouth student, and loved this state so much that I became a resident. My wife, Stefanie, and I raised five children in the Lakes Region and all have stayed and become productive citizens. We want to keep the New Hampshire we have come to love, and are disturbed by outsiders who have moved here intending to change our way of life.

I practiced ophthalmology in Carroll County for 30 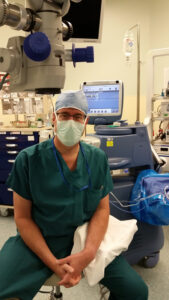 years – mostly based in Wolfeboro, but also for some years in North Conway. As a business owner I created jobs and as a doctor I got people back to their jobs. Many of my constituents are my former patients – they know me, I know them, and they know I have their best interests in mind as I make decisions in Concord.

Over the years, I have given back to the community that has treated me so well. For twenty years, I was the volunteer Health Officer of Brookfield – promoting the common good and public health is very important to me. For 18 years, I have served as Trustee of Huggins Hospital, including 10 years as Treasurer. I am fiscally disciplined and am proud of the role I played in putting Huggins on a firm financial footing – especially with recent issues at nearby hospitals. For 12 years, I was Brookfield’s Moderator, ensuring fair elections and our citizen’s right to vote. No one stole New Hampshire’s election.

For the last six years, I have been proud to represent

Carroll 8 in the NH House. In the last three years, 45 bills I have sponsored or cosponsored have become law – this year 19 more passed both bodies – making me one of the most productive House members. Last year, HB1623 expanding telemedicine was crucial in providing care during the pandemic. Carroll County will not lose influence if I become your Senator.

Further, I have experience in numerous committees working on legislation in the House. This is where the real work gets done in the House. For 5 years I served on Health, Human Services and Elderly Affairs. Briefly, I served on Election law, but was moved to Executive Departments and Administration after switching parties. Currently I serve on the Health and Human Services Over site Committee, the State Health Assessment and State Health improvement Plan Advisory Council, and am one of the Governor’s appointees to the NH Prescription Drug Affordability Board. I was the Vice Chair of the Commission to Study Allowing Pharmacists to Prescribe or Make Available Via Protocol Oral Contraceptives and Certain Related Medications, which gave a unanimous recommendation to HB1822. This bill made the pill available without prior prescription in NH. Since inception, I have chaired the NH Rare Disease Advisory Council, and been the Vice Chair of the NH Telehealth Commission. In 2019, despite being in the minority, I chaired the Committee of Conference on HB 511 and served on HB508, both of which were signed into law.

Like many traditional New Hampshire Republicans, I thought of myself as fiscally disciplined but socially compassionate. I treat the people’s money as frugally as I treat my own. But both nationally and here in New Hampshire, the Republican party has tried to purge itself of people like me. I tried to change this working from the inside and have concluded that is impossible.

Last September I left the Republican party and became a Democrat. The story is well known. The Democratic party is a big tent and I have been enthusiastically welcomed. I invite others no longer welcome in today’s Republican party to join me in moving on.

Every week I am amazed by the outrageous new ideas brought forward in our state legislature. Most disturbing are numerous bills that would dismantle public health in the name of individual liberty. COVID will not be the last pandemic. We need a robust public health system in NH coordinating state and local government to be better prepared next time.

I believe in compromise but not appeasement. Compromise becomes appeasement when an extreme group takes control of the legislature. Those who support and encourage extremists by abandoning long held positions are as much of a problem as the extremists themselves. Proposals included blocking local zoning regulations and regulation of short term rentals, preventing school districts from utilizing reasonable public health measures during a pandemic, and imposing one group’s morality on school curriculum. These are all issues where compromise is not possible and half measures become appeasement. Appeasement does not work and history does not judge appeasement well. I believe I have convictions strong enough to make this distinction on behalf of my patients, now constituents, who I have known for decades.

In NH and throughout our country, we see increasingly partisan politics. While most voters are somewhere “in the middle,” our representatives are increasingly divided. Sadly, my former party has detached from reality. It is time for people like me to move on.

We need a Senator advocating the moderate policies supported by most of our citizens. We need a Senator with the character to stand up to the loud and vocal minority which has gained control of the Republican party. I am running to become that Senator for District 3.